This scheme was started by the previous Chief Minister of the state Shri Prem Kumar Dhumal. Under this scheme the Chief Minister himself, visited parts of Himachal Pradesh to redress the grievances of the Himachalis.
In the budget 2013-14,it is clearly mentioned that this scheme is of prime importance to the present government as the people of Himachal Pradesh are the priority of the state government. But 6 months have passed and there has been no action by the government. 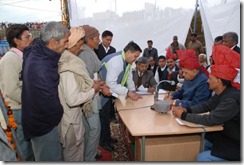 Benefits of the scheme-
1. The government comes to your doorstep to solve your problems.
2. More effective and time saving method than E - Samadhan.

Mr. Dhumal visited Kangra, Una, Hamirpur, Chamba etc. , and took this scheme seriously.
The scheme if implemented properly would help poor people reach the government directly. It is a known fact that to reaching the govt. via middle groups only leads to delay in decision making, and often waste of time. So this scheme would be helpful in redressing grievances in a minimum interval of time.
( The views in this blog are my own views. I don’t support a particular party, sect, religion or cult. I only support truth, and those people who believe in it. )
Posted by INDIA : Voice of the generation at 10:23 AM