RISING RATES OF CRIME IN SHIMLA

Shimla is evolving, and so are we. Earlier in 1991 when I was born, my parents told me that the facilities in Shimla were negligible in comparison to the facilities what we have today. The roads were calm, the wind was soft, the hustle was little and the people were friendly. But today the scenario has completely changed. The roads are full of vehicles, the wind is filled with lead, the shoulders have ignited temperatures and the new faces have created distances. The population has increased by 50000 people from 1991. This has led to sprawling of new structures right within the heart of Mother Nature.
This talk is not about the people who have been in Shimla for all this duration or who have been transferred to this beautiful city. This talk is about the new faces who have added to the stack of known.  I am talking about the laborers who have come from Nepal, Bihar, Bangladesh etc. to work in this city. In 1991 very few incidents of robbery, snatching etc. were reported to the police. But this count has risen to an alarming rate due to the intruders. The problem cause is as given.
1.     Problems due to unknown count of such people-

1.
Very few days back in our locality, some people broke the glass of a car and stole the valuables inside. After confirmation it was found that those people were the Nepalese. A few days back I read a news in newspaper that a daylight robbery took place in a home in Chhota Shimla, where an unknown laborer was reported on site. The instances are not new. Many people come in Shimla in search of jobs. They dwell in the slums of the city, and work on construction sites, in shops etc. They have no official records, and are hired by people because they are ready to work on low wages. I am not saying that all these people are responsible for the havoc, but this is a true fact that with their entrance in to the city. The crime rates have also increased. This post is not based on state bias, gender bias, or any sort of thing. This is what all people know what is happening in Shimla.

Solution- The municipal corporation should register such people coming in Shimla. They should only work under ‘work permits’. It is very obvious that such an arrangement would require extra sums of money, but for the safety and security of the residents of Shimla, it is very much important. 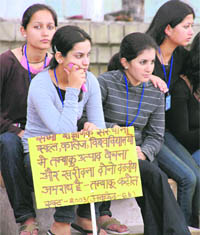 With the opening of the city, and intermixing of ideas and culture. The youth of Shimla has completely changed. Many students, including boys and girls have come in contact with harmful chemicals and substances used to make people high. This is a complete U-turn from the earlier scenario when only elders used to know about the stuff. Now even class 7 students have started to smoke and amazed by their seniors, are blindly attracted towards maal (weed). To satisfy their needs they steel from their homes. In case they are not able to get something from home. They turn toward crimes. A previous chain snatching incident is a related story. It is not a single incident, even people close to me have been attacked by young people for money. These shortcuts to earn money are basically to satisfy their own needs. Buying expensive stuff and satisfying their talab (satisfying the need of body to smoke or remain high).
This is just an example of how things are going on in Shimla, and how these conditions will lead to severe crisis in the country. Much more can be written regarding this matter.
The parents are totally responsible for their kids. This thing will be explained in another article.

Solution- Identifying the people smuggling poisonous stuff to the city and understanding the kids and their needs to grow and shine.

We are the future of India, and it is we on which the government works.

Smoking In Shimla
PG in Shimla
Playground In Shimla
Posted by INDIA : Voice of the generation at 9:49 AM